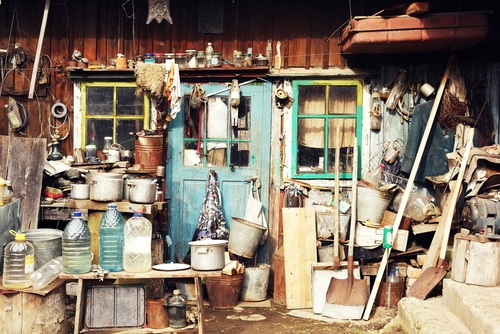 Your choices are far from trivial, however. Cluttered space and disorganization make life feel muddled, and can turn a sentimental home into an unfeeling stockpile. Fortunately, solutions aren’t needles in the haystack.

Most of us suffer from bouts of disorganization. But when is it a real problem?

There are three generally accepted qualifications of hoarders: They acquire too many things, they have difficulty discarding things even when they are no longer useful or needed and have difficulty organizing possessions.

Linda Richards, CPO-CD, a professional organizer in Cottonwood Heights, Utah, says that hoarding is often characterized by mounting clutter that creates chaos and approaches being unsafe. Furthermore, rooms in a house stop being used for their intended purposes. For example, a spare bedroom gets filled with messiness instead of guests, or the dining room table becomes a place for papers and letters instead of food.

The Institute for Challenging Disorganization has developed a Clutter-Hoarding Scale for organization professionals to be able to assess the problems of clients and the potential safety issues. The levels go from 1 to 5, with 3 being the border between clutter and hoarding. When a person reaches higher levels, safety and sanitation are issues, a health professionals are called in, and possibly psychologists.

Where do you fall?

This scale shows that individual disorganization falls on a spectrum. Hoarders fall on one side, but a habitually messy desk falls on the other. Messiness isn’t hoarding; it’s humanity.

Even if a person isn’t hoarding, there are a host of negative aspects tied to disorganization that go beyond appearance. It affects relationships, confidence and anxiety, to mention just a few things.

Richards says a key indicator of a clutter problem comes from social life, when clutter blocks interaction with peers.

“For some people, they want to socialize, but feel so embarrassed,” she says.

Richards calls this the CHOAS syndrome: Can’t Have Anyone Over Syndrome.

Don’t be tricked into thinking that getting organized is simply a matter of getting off your heiny. That is a key part, yes, but certain principles can guide your efforts in a powerful way.

Here are some key principles from Richards:

Another time, Richards informed a woman that she had seven of the same kitchen appliance. She resolutely declared she only had two, until Richards showed all seven.

Richards says one reason why people let clutter go on and on is because they are scared of the time commitment it may take to clean. For this reason she sets timers for people, from 5 minutes to 30 minutes.

“This erases the fear that it will take forever,” she says. “And it stops them from taking too long.”

She says messy people often aren’t good with time management. Some will start a task saying it will take five minutes, and it takes two hours. Others say a task will take all day when it only will take an hour.

Richards’ advice makes one thing clear: cleanliness often starts in the mind. It is about making a decision in your head, being realistic about time commitment and being confident that you can be organized.

Ways We Think About Time The Wrong Way

Sun Feb 23 , 2020
It’s time to rethink time. Written by Michael Richardson Is the tick-tock of life a symphony of sound or the rhythm of impending doom? What is time for you? Taking Back Time Humans invented the tick tock noise, and humans can take control of it, even if it momentarily slips […]